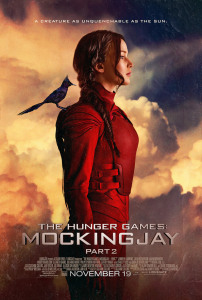 The relentless bestselling blockbuster franchise comes to a close. Did it fly high or flop like a turkey?

As the war of Panem escalates to the destruction of other districts by the Capitol, Katniss Everdeen (Jennifer Lawrence), the reluctant leader of the rebellion, must bring together an army against President Snow (Donald Sutherland), while all she holds dear hangs in the balance.

And now it comes to an end. A billion dollar franchise that spawned more bestselling adaptations than I could take and launched the career of one of Hollywood’s top leading actresses. Was it all worth it? After four films with one being split into two parts, did it conclude to my liking?

To an extent, it did. A mixed bag would be the best phrase to sum up my thoughts. A little disappointing after all that promise and build up. Now, I will admit straight off the bat. Like…