Wednesday 4thLena Hall told Ferny I fancy him. I don’t think they were lying coz Hayley told me and Lena admitted it. They said he asked, “Which Tess?” and looked embarrassed. Ahh!

I told Dougie that he was going to blind someone with that coat of his outside Geography. He didn’t look very impressed! He kept asking me and Lizzie to go to the library with him but Miss wouldn’t let us. 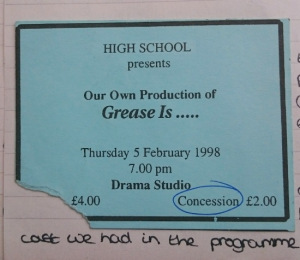 I went to see the school’s production of Grease tonight. Everyone said we had the crap cast but they were all really good. I’ve underlined the cast we had in the programme. →

It was really good and there were quite a few people I know in it.

I’ve never been down B Block stairs so fast before today after I saw Ralph and Ferny behind me. I think Ferny spotted me…